The Pálffy Palace complex was built from 1646 to 1653 on the location of vineyards situated between today’s Svoradova and Škarniclová Streets. Count Pál IV Pálffy, who was the chairman of the Diet of Hungary at that time, was commissioned to lead a large-scale reconstruction of the castle. When working on the plans for the reconstruction he decided to build a residence for himself beneath the castle. 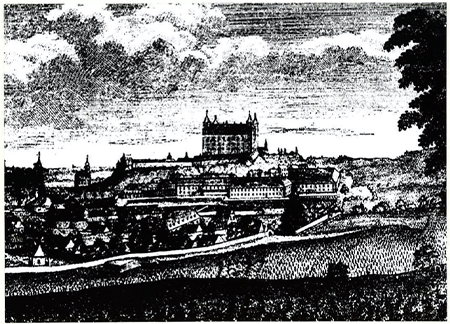 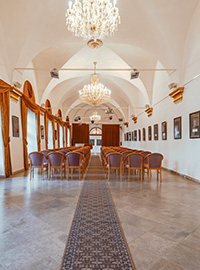 The palace was an extremely luxurious aristocratic residence for its time. Royal builders Giovanni Albertallo and Giovanni Battista Carlone supervised its construction. It featured three enclosed courtyards, and a partially open service courtyard. The staircase pavilion was also a part of the long garden wing with grottos, which was situated parallel to the new Zámocká Street and has been preserved.

The upper floor featured a long hall with a barrel vault and keystones. The sala terrena (garden hall) on the lower floor was opulently decorated with mosaics, murals and stucco. The entire space called the gallery or pavilion served for social and official purposes. Its furnishing was carried out by the same artists who decorated the chambers of Bratislava Castle.

The large garden was full of exotic plants, fruit trees, artificial caves, sculptures and fountains. It was surrounded by high walls with a portal and a wide staircase leading to Zámocká Street. The garden with its well-conceived system of Italian-style terraces, alleys and stairways was unique for its time. There were five gazebos, two pavilions, even a theatre with a round stage and semi-circular amphitheatre. The two fountains created by artist Pietro Maino-Maderno were the masterpieces and pride of the garden.


The huge linden tree, which was also captured in an engraving from 1735, was the garden’s main attraction. Its massive treetop was surrounded by a seven-storey wooden structure with a gazebo on top. Count Pál IV Pálffy loved to bring his guests there to discuss matters amidst the therapeutic ambience of linden flowers and chirping birds. In all likelihood, the “offspring” of this linden tree and the pine tree are still growing on the neighbouring Palisády Street. The original Renaissance garden depicted in the copper engraving of J. Ledentnau from 1663, was converted to a Baroque garden in the 18th century. 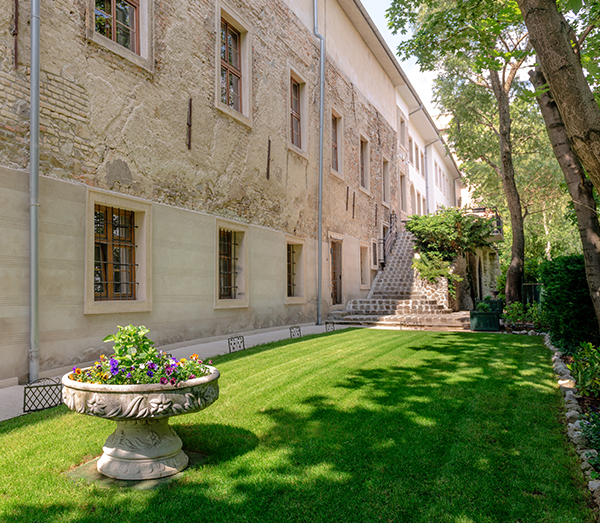 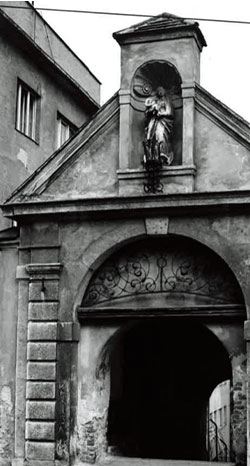 In 1732, the residence became a short-term seat for Francis Stephen of Lorraine, husband of Maria Theresa. The garden palace served the Pálffy family until 1870, when the city purchased it for 150,000 Guldens and converted it into artillery barracks. The army devastated the building which later became a warehouse and the site St. Elizabeth’s Orphanage. During practical renovations the garden pavilion was adjusted, many rooms were divided by walls, windows were reduced, and the sala terrena level was raised by 2.5 meters which covered up several murals.

As if that wasn’t enough, in 1922 the former aristocratic residence was converted into a student’s dormitory and later replaced by a new construction. The garden wing and staircase pavilion were the only sections that were preserved, but even they continued to deteriorate. Until 1990 the palace was in the ownership of the Czechoslovak State and administered by Bratislava I residential housing authority which used the palace as a storage space for gritting material (!). If it had been well-preserved, today it would be one of the most significant early Baroque examples of secular architecture not only in Slovakia, but all of the former Habsburg Empire.

In 1990, the rest of the palace was under the threat of total demolition. Eventually the Veterans’ Club acquired it. The state of ruins was catastrophic, and certain steps had to be taken by structural engineers to prevent the collapse of the sala terrena vaults. In 2000, Pálffy Palace was acquired by the Podpora Cooperative for technical and social development and the renovation and restoration of valuable murals from the lower floor began immediately.


The coop strives to bring Pálffy Palace back to life and to encourage the return of cultural and social events. It preserved two portals, a fragment of the stucco decoration and parts of the garden with traces of the decorations in the sala terrena and one of the grottos. As a result, this unique cultural monument can be the site of your conferences, training events, congresses, exhibitions and celebrations.

This website uses cookies to improve user experience. If you continue to use this site we will assume that you are happy with it.